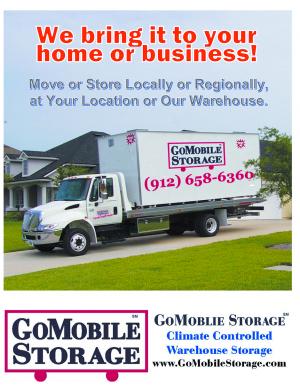 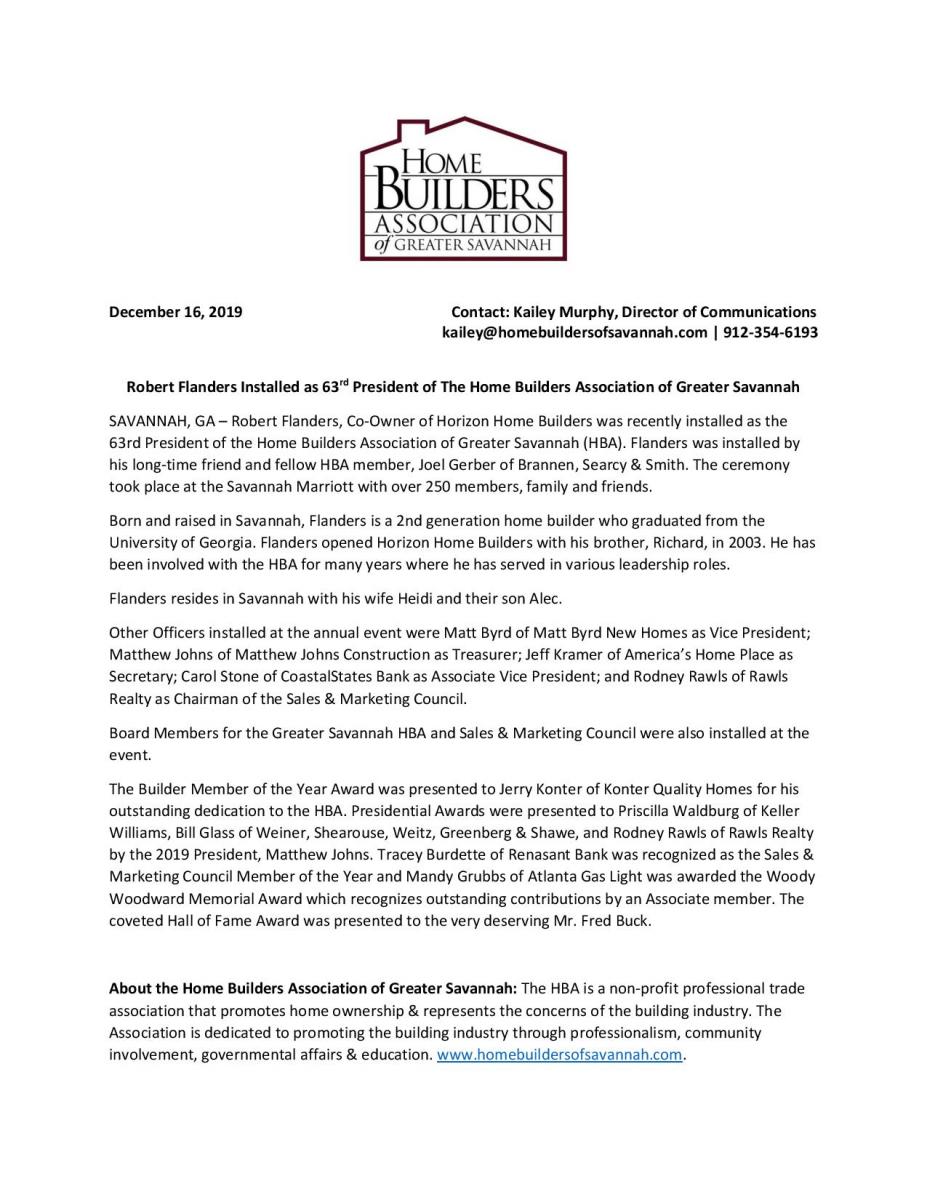 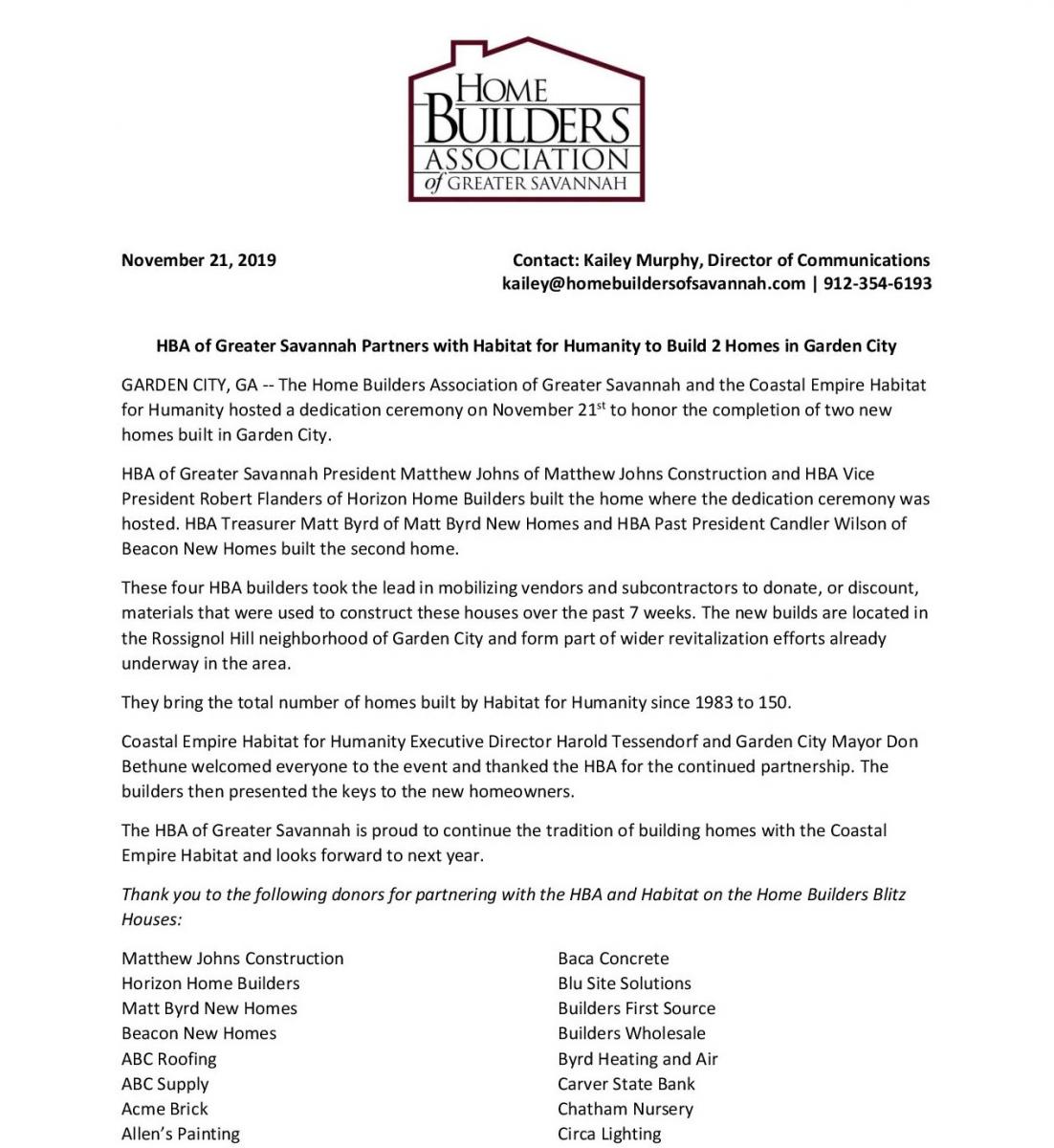 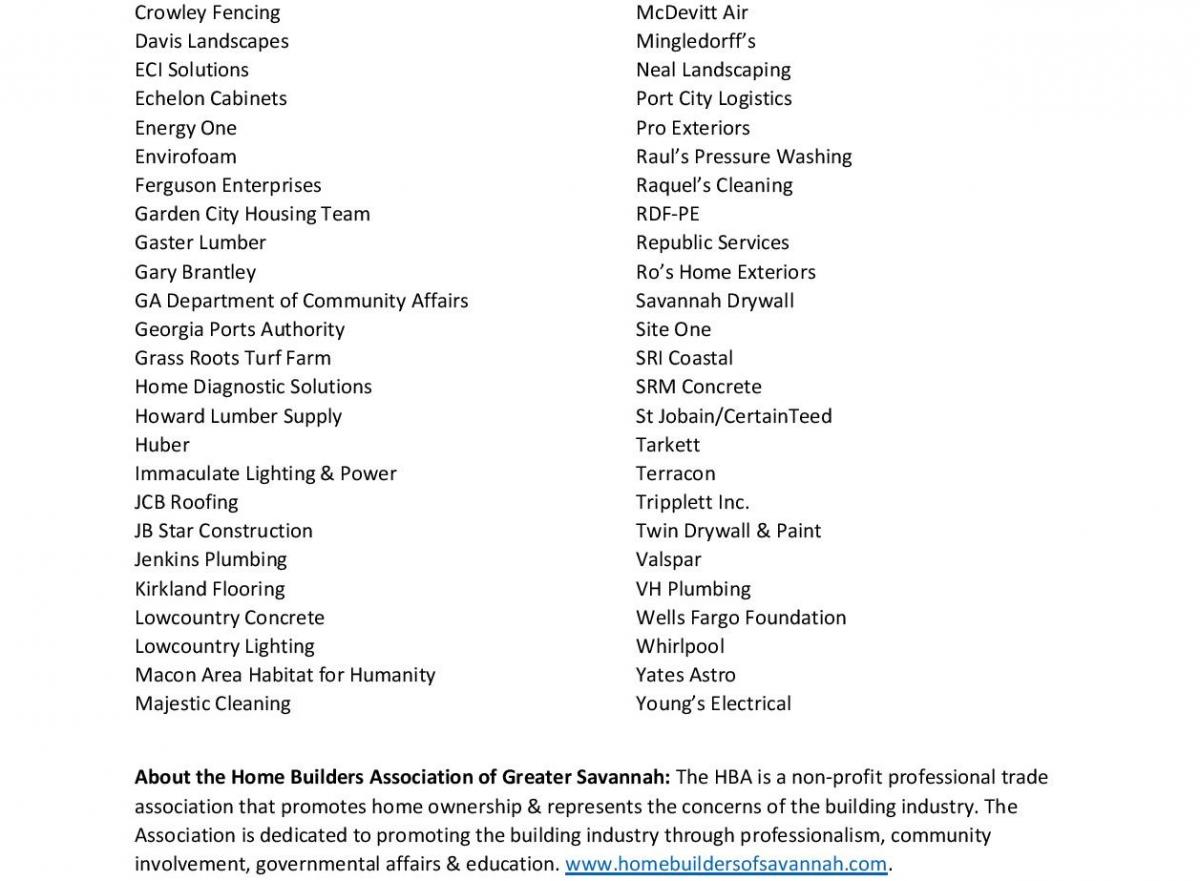 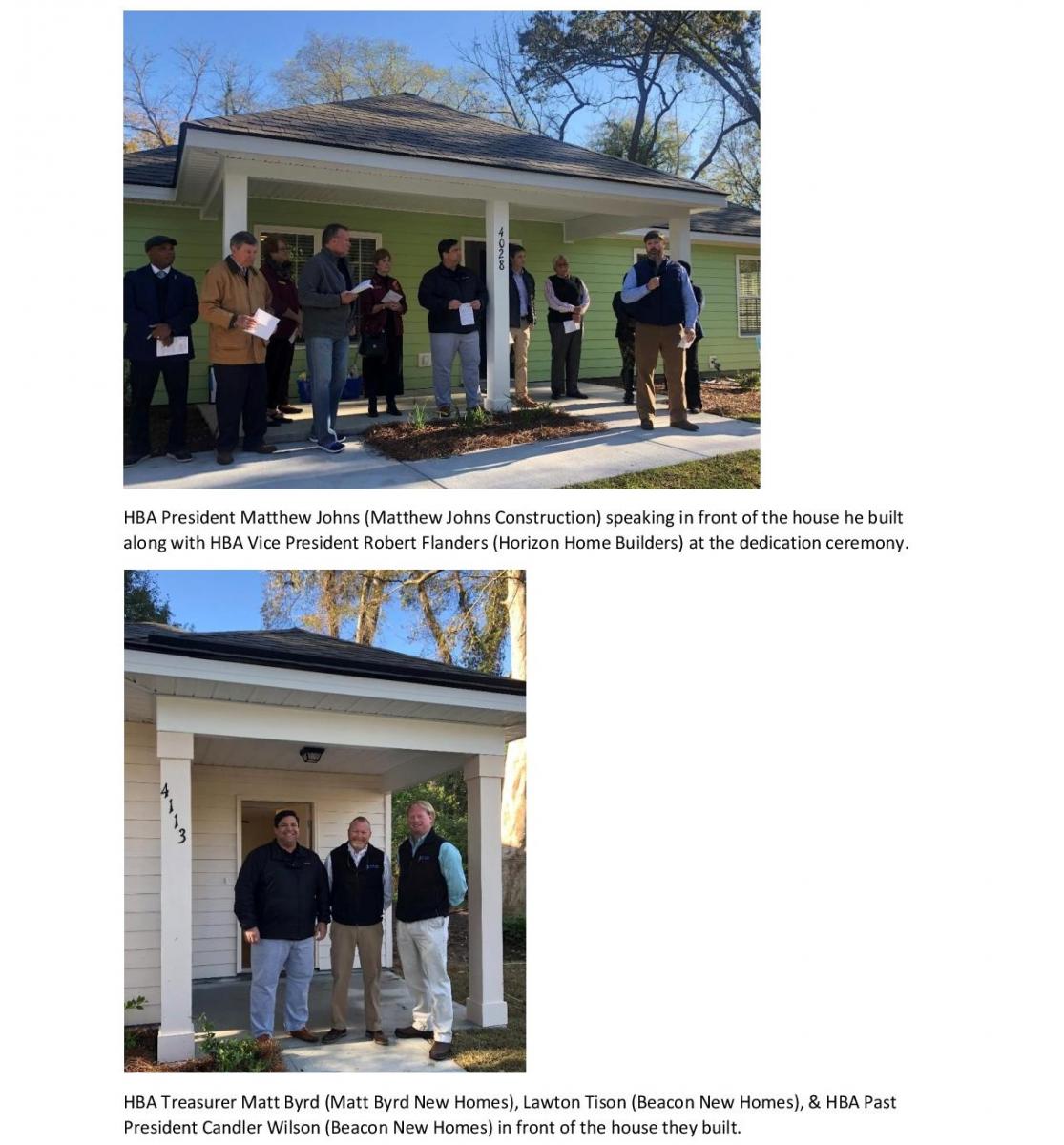 (SAVANNAH, GA) The Home Builders Association of Greater Savannah will present a $5,000 donation to Savannah-based mentoring group Xcel during the 2019 Dust and Grain Woodworking Competition at 10 a.m. on Saturday, May 18 at Maven Makers, 415 W. Boundary St.

“As homebuilders, we are delighted to take part in a project that draws attention to the value of careers in the trades,” said Patty Rietkovich, executive officer of the association. “We need to develop the skilled craftspeople who will build the homes, schools and businesses of the future.”

The May 18 event marks the culmination of a competition that began last month. Different teams got their assignment in April to build a stool using lumber from Emergent Structures, a local re-purposed lumber yard. Judges will select three winning teams, each of which will receive production opportunities from Maven Makers to produce a product for the local home, restaurant, hotel or furniture industry.

Additional competitions and displays of woodworking skills are scheduled prior to the announcement of the winning teams. The day’s activities, which are free and open to the public, are designed to appeal to families and will include Current Catering onsite for lunch, as well as raffles and giveaways.

Xcel is a Savannah mentoring nonprofit organization that concentrates on moving young men ages 15 to 25 into the workforce via the trades. It has partnered with such groups as Bethesda Academy and the Dream Campaign. Jay Thompson, founder and CEO of Xcel, has partnered with Maven Makers, a woodworking maker space, to inspire and train young men in woodworking professions.

Learn more about Xcel at xceltoday.com.

ABOUT THE HOME BUILDERS ASSOCIATION OF GREATER SAVANNAH
The Home Builders Association of Greater Savannah is an organization of local builders and builder associates, dedicated to promoting homeownership to as many people as possible in Chatham, Effingham, Bryan and Liberty Counties, while supporting each other through continuing education and networking opportunities. The organization was founded in 1955 with 27 charter members. Today, the Home Builders Association of Greater Savannah has more than 550 current members, serving on more than 15 committees and councils, with an additional 500 members of the sales & marketing council. It is the second largest association in the state of Georgia. Membership benefits include continuing education classes, workshops and seminars, trade networking opportunities, lower insurance premiums, a Membership Directory and regular membership meetings. The Association is headquartered at 7116 Hodgson Memorial Drive, Savannah, Ga 31406. Patty Rietkovich serves as the Executive Director. For more information, call (912) 354-6193 or visit http://homebuildersofsavannah.com. #HBAofGreaterSavannah 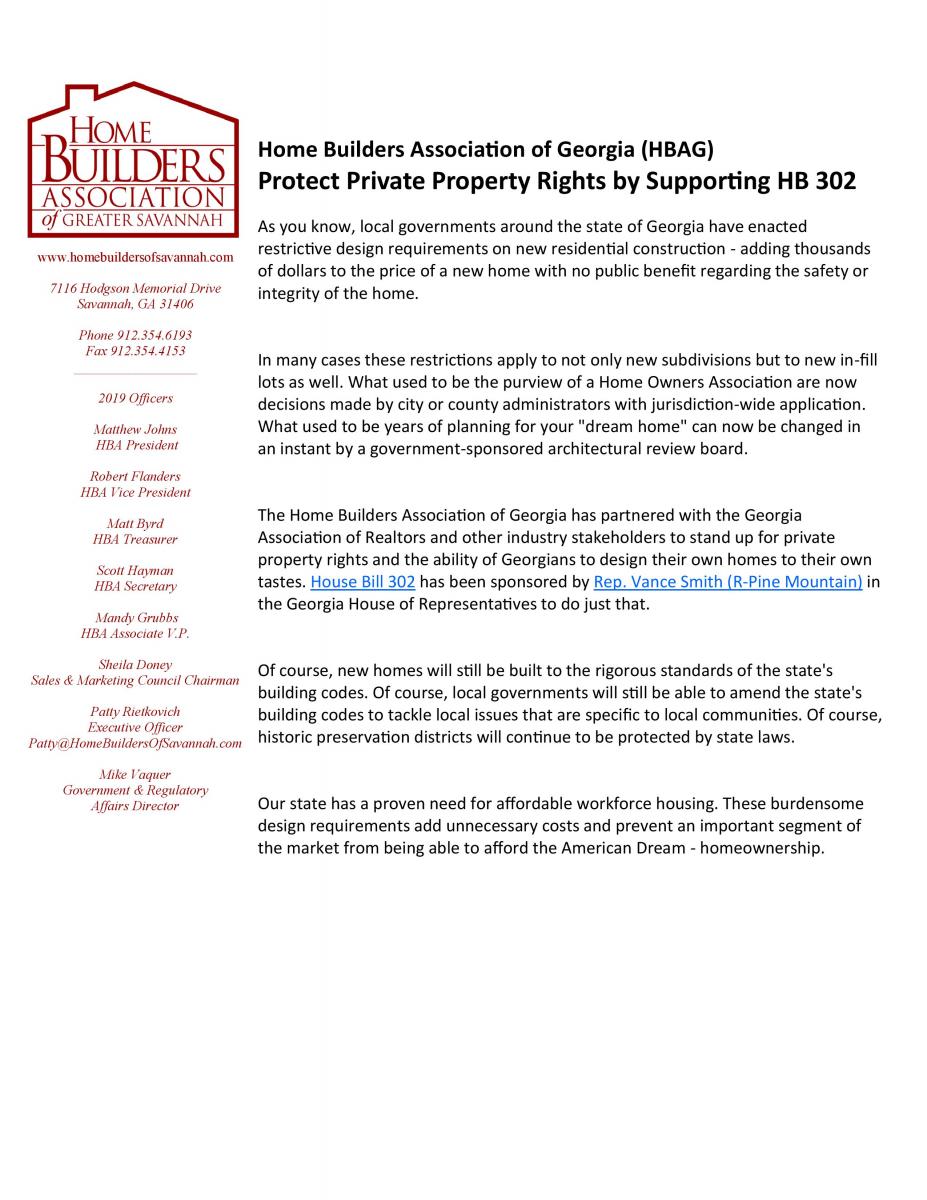 Home Builders Association of Greater Savannah Files Lawsuit Against Bryan County
Bryan County recently passed two ordinances that go way beyond the government’s powers by restricting private property rights and making new homes unaffordable for teachers, first responders, military and other moderate income homebuyers in Bryan County. If home ownership is the American Dream, then these ordinances unnecessarily push that dream out of reach for too many Bryan County citizens.

Under its newly enacted Interim Development Ordinance, Bryan County is telling private property owners how they must design their homes. For example, the County is requiring roof and garage designs that go far beyond the government’s role to protect health and safety. Instead of helping citizens, these requirements only serve to increase the cost of home ownership to the detriment of our citizens.

At the same time, the County has enacted an unlawful Impact Fee Ordinance, which charges new homeowners and businesses excessive fees for traffic improvements. On top of the substantial increases in cost caused by the development ordinance, under the impact fee ordinance, homebuyers will pay an additional $3,128 for new homes. For Bryan County citizens hoping to open their own businesses, the situation is even worse. A new fast food restaurant could pay $310,000 in impact fees, a gas station and convenience store could pay $500,000 in impact fees, and medical offices could pay between $70,000 and $115,000 depending on their size. There is a clause that allows the County to exempt some businesses from the ordinance, however, residential construction cannot be exempted. If the County gets its way, new homeowners will likely bear the brunt of the impact fees, which will make homes even less affordable in Bryan County. Such unequal treatment is unconstitutional and violates the terms of the Georgia Development Impact Fee Act.

The Home Builders Association of Greater Savannah works to promote, protect and preserve home ownership in the greater Savannah area, including Bryan County, Georgia. The HBA is dedicated to promoting home ownership for all citizens in Bryan County and we strenuously oppose any zoning codes or other regulations that diminish housing availability or affordability for moderate income homebuyers. For all of these reasons, the Home Builders Association has filed a lawsuit against Bryan County to prevent the government from overstepping its limited authority, to protect the rights of property owners, and to keep housing affordable for all Bryan County citizens.

What’s wrong with the County publishing regulations that include design standards?
First of all, the government’s powers are limited for good reason. Citizens of Bryan County, Georgia, and the United States enjoy broad constitutional property rights. The government can take, deprive or diminish those rights only for very limited purposes – namely, the health, safety and welfare of Bryan County. If regulations are not rationally related to these goals, then the government should stay out of your business and off of your property.
Second, unless clearly and reasonably related to health, safety or welfare, the government should not discriminate against property uses or users, and the government should not take or infringe property rights without justification, due process or compensation. In this case, the government is taking away valuable fundamental property rights, including the right to build a good and safe house according to the owner’s specifications (and industry standards). There is no basis for this taking and no compensation offered for same.

What development ordinance restrictions are you talking about in particular?
The Ordinance (i) restricts building materials that are otherwise permitted under the International Building Code (e.g., vinyl siding and the use of more than two different materials on the front of a residence), (ii) promulgates architectural restrictions that increase the building costs without any benefit whatsoever to public health and welfare (e.g., requiring four roof planes to be visible from the front property line and restricting garages to less than 50% of the house façade), and (iii) places unreasonable restrictions on apartments (e.g., restrictions against more than 6 units in a single building and requirements that apartments must have private gardens, yards, patios or balconies), among other indefensible restrictions. These regulations have the effect of increasing home construction costs for the builder and the buyer, which makes home ownership more difficult (or unachievable) for moderate income citizens, without any reasonable justification related to public health, safety, morality or general welfare.

What’s wrong with assessing Impact Fees to pay for road and traffic repairs and improvements?
The critical problem with the Development Impact Fee Ordinance (DIFO) is that there is an insufficient nexus between the projected growth in Bryan County and the fees to be assessed against new permittees, including, in particular, homebuilders and home buyers. Impact Fees cannot be used to remedy already existing problems, such as lack of capacity on roadways. Instead, impact fees must be used to pay a proportionate share of the cost of system improvements needed to serve new growth and development. Although the County’s projections predict a 29% increase in the population by year 2030 (or a 10,000 person growth between 2020 and 2030), for purposes of the new ordinance, the County predicts an 80% increase in traffic in Bryan County during the same period owing to persons who do not live in Bryan County today. More particularly, the County projects an increase from 11,000 vehicles per day (VPD) to 57,000 VPD. The Capital Improvements Element (CIE) provides no source documentation for these increased traffic numbers. Rather, according to the Transportation CIE, “virtually all roadways and intersections in South Bryan County classified at or below the minimal service levels” already existing in 2015, three years prior to the DIFO passed on January 8, 2019.

Bryan County says that it afforded the HBA plenty of opportunities to participate in meetings and committees regarding the new ordinances before their passage.
That is not true. Bryan County did not afford the HBA time or opportunities to participate in meetings or discus-sions regarding these ordinances. If they had, the HBA would have been actively involved in the pro-cess. Moreover, once published for consideration and commentary, the County did not allow HBA Members to participate on committees that were intended to represent their industry, notwithstanding commitments to do so and emails, phone calls and other correspondence from the HBA to the County recommending members for participation.

Are you accusing Bryan County of intentionally discriminating against certain classes of persons?

The Commissioners can speak for themselves regarding their intentions. At least one Commissioner has already made plain his view that Bryan County is like an exclusive club, where members should pay to play. The HBA is not prepared to speak for all of the Commissioners, however, we would note that, whatever their intentions, the impact of the ordinance is the same – it unfairly and unnecessarily excludes certain persons and housing products from the market without any justification related to health, safety or welfare whatsoever. The County should not be in the business of writing or enforcing design and architectural standards. That is not their exper-tise or their mandate. Their powers are limited to promoting and protecting health, safety and welfare. When they exceed their mandate, they take away the rights of citizens and start down a slippery slope that encroaches on our freedoms.

You may view the video from the Press Conference held on Thursday, February 7th by clicking on the link below: